A tribute to Dr. Keith Stenehjem 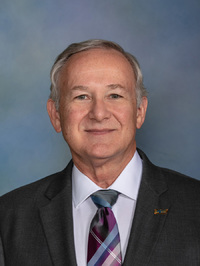 A tribute to Dr. Keith Stenehjem

Keith began his tenure at Mayville State as Chief Information Officer, and later was named Vice President for Academic Affairs. He has championed innovation, new programs, and multiple partnerships for Mayville State University.

Dr. Stenehjem says he’s proud to have been a part of the entire Mayville State University team of employees who have made great strides in growing the university. These achievements have allowed Mayville State to better serve the state of North Dakota. He credits the unending support of the MSU faculty and staff for making these important advancements possible.

Significant achievements during Dr. Stenehjem’s tenure include the creation of the Office of Extended Learning, which assists faculty as they build distance academic programs while the extended learning office keeps things moving forward by taking care of the administrative work. Because of this, Mayville State is able to maintain a stable residential campus, while enrolling a large percentage of students who complete their studies online. This has resulted in record enrollments for several-straight academic years and semesters.

Stenehjem defended Mayville State’s request to provide graduate credit before the North Dakota State Board of Higher Education several years ago. It was a difficult, but rewarding accomplishment that allowed Mayville State the opportunity to provide graduate credit in the area of teacher education when the SBHE gave their approval in the spring of 2011. Since this time, MSU has expanded graduate programs with a Master of Arts in Teaching degree which was launched in 2015; and a Master of Nursing degree, which is currently pending final approval from the Higher Learning Commission. We are hopeful that this approval will be awarded in March of this year.

Dr. Stenehjem was also a leader in helping to bring the Bachelor of Science degree in Nursing to Mayville State in 2013. This significant academic program has taken Mayville State into the previously uncharted territory of nursing and healthcare and brought a new population of students to the Mayville State family and is helping provide a need for North Dakota.

Keith said, “There were some tough times earlier in my tenure at MSU, and I am proud to have been on the administrative team that developed the plan to ‘turn the campus around’ with a combination of solid budgeting and strategic planning, which helped to grow the residential campus and distance programs.”

Dr. Keith Stenehjem has been a key player in the growth and success Mayville State has seen over the last several years, and we are grateful for the leadership he has provided. We thank Keith for his outstanding work and service to Mayville State University, and wish him and his wife, Loree, all the best in their retirement.