Senator John Hoeven will deliver the commencement address May 17 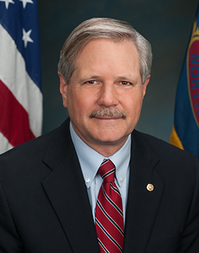 Current graduates Elizabeth Cakebread, Shelly, Minn., and Adam Edwards, Letchworth Garden City, Hertfordshire, England, will speak on behalf of the graduating class. Dr. Kirsten Diederich, Fargo, N.D., president of the North Dakota State Board of Higher Education, will bring greetings on behalf of the Board; and Pastor Nathan Strong from Mayville Lutheran Church will deliver the invocation.

Mayville State’s graduation day festivities will begin with the traditional graduation brunch, hosted by the MSU Alumni Association. The event will begin with socializing from 10:00 to 11:00 a.m. in the MSU Campus Center Foyer. A sit-down meal and program will begin at 11:00 a.m. in the Campus Center Luckasen Room. Michele Jensen, Moorhead, Minn., Josh Jefferies, Fairbanks, Alaska, and Nisa Rajput, Harare, Zimbabwe, will speak on behalf of the MSU Class of 2014. The members of the graduating class will be the guests of honor at the event. It is also open to MSU faculty and staff and friends and family of the graduates. Thanks to a generous sponsorship from Gate City Bank, there will be no charge to attend the graduation brunch.

Following the commencement ceremony, Mayville State faculty, staff, and administration will host a reception in honor of the graduates. In celebration of Mayville State’s 125th anniversary and the Scandinavian roots at the founding of the institution, the reception will also be a celebration of the Norwegian Constitution Day, or Syttende Mai. The National Day of Norway is an official national holiday observed on May 17 each year. The Mayville Sons of Norway group will be making and serving Scandinavian treats in their traditional Norwegian costume. The reception will be held at the Luckasen Room in Mayville State’s Campus Center. The reception is open to the graduates and their guests.

Josh Jefferies has been active as a member of Mayville State’s football team, and served as team captain in 2012. He was an all-conference honorable mention in 2012, and was named to the all-conference first team in 2013. He received Mayville State Football’s Spark Plug Award in 2012 and 2013. Josh has also been a member of MSU Student Ambassadors, and served terms as the group’s vice president and treasurer. Jefferies will receive a Bachelor of Science in Education degree, and has earned majors in physical education and history. He is the son of Mike and Kelly Jefferies of Fairbanks, Alaska.

Nisa Rajput will graduate in December of 2014 with a Bachelor of Science degree. She is pursuing a major in business administration and a minor in psychology, and will receive cum laude honors. A scholarship recipient and dean’s list student, she was named to Who’s Who in American Colleges and Universities in 2013. Nisa has been a place-winner in state and national Collegiate DECA competitions and is currently serving as vice president of the local group. She has been an officer and active member of Student Senate, Student Alumni Ambassadors, Peer Leaders, and Multi-Cultural Club. She has on numerous occasions made presentations on Zimbabwe and the Indian culture to various community organizations. Nisa is the daughter of Rajan and Veena Rajput, Harare, Zimbabwe.

Prior to his election to the Senate, Senator Hoeven served as governor of North Dakota. Under his leadership, North Dakota expanded and diversified its economy and gained thousands of new jobs.

Senator Hoeven is a native of Bismarck, N.D. He earned a bachelor’s degree from Dartmouth College in 1979 and a master’s degree in business administration from Northwestern University in 1981. He served as executive vice president of First Western Bank in Minot from 1986 to 1993 and established a strong position of service in many civic, community, and economic activities prior to elective office. From 1993 to 2000, he served as president and CEO of Bank of North Dakota.

Hoeven and his wife, Mical (Mikey), live in Bismarck. They have two children, Marcela and Jack, and two grandsons, Crew and Jaxon.

Elizabeth Cakebread is graduating with a Bachelor of Science in Education degree. She has earned majors in mathematics and composite chemistry. She has also earned a physical science minor and middle school mathematics and science endorsements. A dean’s list student and scholarship recipient, she will graduate with summa cum laude honors. Beth has been active on campus as a member and officer in Student Education Association, the Alpha Phi Sigma honor society, Student Activities Council, Campus Crusade, MSU Theater, concert band and choir and stage band, Science Club, the student newspaper, Peer Leaders, Residence Hall Association, Student Senate, Cometeers, and the Larson Leadership Scholars program. She has provided tutoring services and served as a volunteer at numerous events. She is the daughter of Ron and Julie Cakebread, Shelly, Minn.

Adam Edwards was a student-athlete at Mayville State, playing on the varsity men’s basketball team. A dean’s list student and scholarship recipient, he was named to the Dakota Athletic Conference all-academic team in 2012. As a member of the Mayville State Collegiate DECA chapter, Adam has been an award-winner at the state and national levels. He has regularly volunteered at Mayville’s Luther Memorial Home and was a guest speaker at Peter Boe, Jr. Elementary School for International Olympic Day. He shared his experience with academics in England when speaking to participants at Mayville State’s Business Activity Day. Adam is earning a Bachelor of Science degree in business administration, with specializations in marketing and management. His parents are Wendy and Mark Edwards, Letchworth Garden City, Hertfordshire, England.