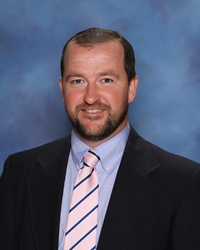 Mayville State University has hired Ryan Hall as its new Athletic Director. Hall will begin his duties at Mayville State in early July.

Hall comes to Mayville State from Benedictine College Preparatory School in Richmond, Va., where he has served as Director of Athletics since July of 2013. He began his career at Benedictine College Preparatory School as the senior admissions/athletics officer and director of summer programs in July of 2010. Aside from his work in administration, Mr. Hall has a successful nine-year record as a head wrestling coach.

“Hall will bring passion and energy to our athletic programs at Mayville State University,” said Dr. Andrew Pflipsen, MSU Vice President for Student Affairs and co-chair of the search committee. “We look forward to welcoming Ryan, his wife, Lindsey, and their children Ryan O’Hara “O.J.” and Berkeley to the Mayville-Portland community.”