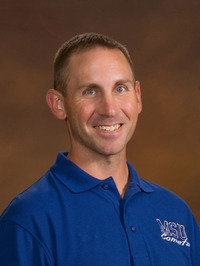 The Orville Johnson Meritorious Service Award is given to an employee who shows outstanding dedication, loyalty, and trustworthiness towardMayvilleStateUniversityand his or her fellow employees. Each year, staff members nominate and select a fellow employee to receive the distinguished award.

The fellow Mayville State employees who nominated Rick for the award had this to say about him, “Rick has done a phenomenal job of creating a sense of community on campus through his weekly emails, his blog, and of course, Captain Comet. I think he has made a real difference.”

Karboviak personifies the Captain Comet mascot that appears at events and in social media promoting Mayville State and its programs. Karboviak is also very active with the Comet Athletic Club, the organization that raises scholarship funds for Mayville State athletes.

Orville Johnson is remembered as a faithful Mayville State employee who worked as a custodian from 1959 until his retirement in 1980. Orville passed away on December 17, 1986. Upon his death, his family donated hisUnited Statesmilitary service flag and $10,000 toMayvilleState. The monetary donation is used to help honor and recognizeMayvilleStatestaff members.