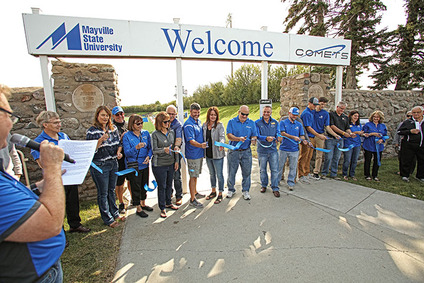 A longtime dream has become a reality! Artificial turf has been installed at Mayville State University’s Jerome Berg Field. The first Mayville State game played on the new turf was the Farmers Bowl game on Saturday, Sept. 8. The Comets defeated College of St. Scholastica 33-29 in the game which was sponsored by First State Bank. Construction on the turf project began in June, under the management supervision of Zerr-Berg Architects, Fargo. A ground breaking ceremony was held June 5. A ribbon cutting program was held at the entrance to Jerome Berg Field prior to the game on Sept. 8.

Program emcee John Klocke, executive director of the MSU Foundation, began the program by telling the crowd in attendance that the turf project was kicked off in 2012 when a group of Mayville State supporters met in January of 2012 to discuss how a field of artificial turf at Jerome Berg Field could become a reality. Three hundred fifteen generous donors helped to make it happen by raising $675,000 to complete the turf project.

See media coverage of the day at the following links: