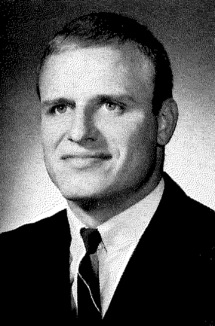 Considered to be the most solemn American holiday, Memorial Day is a United States federal holiday to honor and mourn the military personnel who have died while serving in the United States Armed Forces.

On this Memorial Day, the Mayville State family pays special tribute to our brother, Melville Albert Lurth, Jr., or “Buzz” as he was more affectionately known. Buzz attended Mayville State in the late 1960s.

A native of St. Peter, Minn., Buzz transferred to Mayville State from Gustavus Adolphus College. At Mayville State, he played football and golf. He was highly respected by his fellow students and athletes, as well as the young people in Mayville. It was the general consensus that Buzz was an all-around “good guy.”

Buzz lived in Birkelo Hall on campus for a time, then moved off campus and lived in the basement of the home of Mae and Lief Karlstad in Mayville. Their daughter, Becky Gunderson (’72), recalls that Buzz was like a big brother to her. “We were a family of all girls, so I really appreciated having a ‘big’ brother,” she said. “His smile was infectious.”

Duane Rindy (’75) grew up in that same neighborhood and was in junior high when Buzz was going to school at Mayville State. Duane said that Buzz always looked his best. “He was always friendly to all of us kids in the neighborhood. He would joke with us and throw the football around some too.” 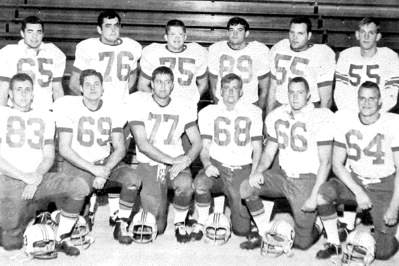 On his way to and/or from work at the Top Hat, Pat Keenan (’68) stopped to buy gas at the local station where Buzz worked. He remembers a particular time when Buzz helped him out. “At that time they were raffling off a set of snow tires. As I was visiting with Buzz, I mentioned that he should put in a few extra tickets for me. He never did tell me how many he threw into the pot, but I did win a set of new snow tires - mounted and all.”

Keenan says he will never forget Buzz, a fine person and a great teammate, and the sacrifice he made.

John Fylling, 1968 Mayville State graduate, was Buzz’s roommate in the Karlstad basement. He got to know Lurth through Mayville State football and the weight room and they became good friends right off the bat. He described Lurth as having a positive attitude, always kind, caring, considerate. “He had a great laugh and was just fun to be around!”

During one spring break, Buzz took Fylling and another Mayville State friend, Jim McGregor (’68), to spend the weekend with his family in St. Peter. Fylling said, “We met his parents, a sister and brother. Right away, I knew why Buzz was who he was. His parents and siblings displayed all that I saw in Buzz.”

It was hard for Fylling to see Buzz pulled away from his senior year of college and drafted into the Army. “I soon was getting mail from him during his basic training, advanced training, and then from Vietnam. All through this, Buzz remained positive and hopeful.”

Then came the letter from Buzz’s sister saying that he had died by enemy mortar fire at his base camp.

Buzz Lurth was a true hero who made the ultimate sacrifice, saving the lives of his comrades and helping to ensure that we can all live lives of freedom as Americans.

John remembered, “I cried, not just for the loss I felt, but for his mother, father, and siblings who would have to live with this pain. Over the years, I have often thought of Buzz and realized what a blessing he was to me for the short time we had.”

Rick Lewis and Buzz Lurth both landed in Vietnam on Jan. 9, 1969. Lewis said, “I didn’t meet Buzz for a few days, probably during our 10-day training course once we were flown up to Chu Lai in the I Corps, and assigned to the 1/82 Field Artillery in the Americal Division (23rd Infantry Division).”

They were then flown south 40 miles by chopper to LZ Liz, which was the site of “C” Battery and home of four 155 mm howitzers. Lewis was subsequently assigned to gun #3 and Buzz was assigned to the Fire Direction Center (FDC). He was also their captain’s Jeep driver, AND because they had no medic, Buzz was tagged for the spot, thus he gained another nickname, “Doc.” Buzz had three different job titles, but his primary duty was FDC.

It was his job to figure out the coordinates for the howitzer section to fire the 155 mm rounds. He and others would get the location of the units in the field, calculate the quadrant, deflections, and powder charged to be used, as well as the type of round that should be shot. The 1/82 Field Artillery had a reputation for accuracy. It took the professional actions of all involved, from the guys in the field to FDC, to the men actually firing the round.

Reflecting on his friend, Lewis said, “Buzz was liked by everyone and he always seemed to have a smile. He was just a great guy. I never heard a cross word from him and he treated everyone like a friend. Buzz was four years older than me, and I had the greatest respect for him. His death has haunted me since 1969.”

Rick Lewis was able to connect with Buzz’s brother, Dave, in late 2006. Dave continued to grieve the loss of his brother until he died of cancer in 2011. In the five and a half years prior, Rick Lewis and David Lurth became very good friends. They provided good therapy for one another, helping to ease the pain of losing a special brother and friend.

An account of the June 8, 1969 firefight that took the life of Melville Albert “Buzz” Lurth, Jr. appeared in the St. Peter Herald.

“Buzz entered the Army Aug. 6, 1968, and had been in Vietnam since January 9, 1969. Private First Class Lurth distinguished himself by exceptionally valorous actions on 8 June 1969 while serving with Battery C 1st Battalion 82d Artillery.

“On that date Battery C’s perimeter was breached by an enemy sniper squad. When the attack alarm was sounded, Pfc. Lurth, without hesitation, moved his defensive position in the bunker in front of the fire direction center. Upon reaching his position, Pfc. Lurth came under intense enemy fire and was knocked out of the bunker by a chicom grenade. Although stunned by the blast, he returned to his position and placed heavy volumes of suppressive fire on the insurgents. Despite the enemy barrage directed against him, Pfc. Lurth continued to provide covering fire for his comrades until he was mortally wounded. His timely and courageous action was instrumental in the successful defense of the battery.

“Among the several medals posthumously awarded Pfc. Lurth were the Bronze Star Medal of Heroism in Ground Combat and the Purple Heart.” 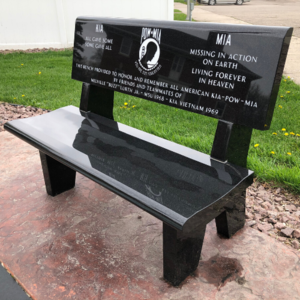 Pfc. Melville Albert Lurth, Jr. is memorialized at the Vietnam Veterans Memorial in Washington, D.C., and his former teammates and friends have also paid tribute to him at the Military Honor Garden located on the south lawn of the Edson and Margaret Larson Alumni and Leadership Center on the campus of Mayville State University. The bench honors Buzz and all American soldiers killed in action, prisoners of war, and those missing in action.

Martin Johnson, 1966 Mayville State graduate and USMC Corporal, and Lieutenant General Emil “Buck” Bedard (Retired, USMC), 1965 Mayville State graduate, head up the project. These men have worked hard to ensure that the Military Honor Garden is an extra-special and meaningful tribute to those who bravely served, and continue to serve, to uphold our country’s liberty and freedom. Click here to learn more about the Military Honor Garden.

Respected for how he lived and how he died

General Buck Bedard summed up the impact Buzz Lurth made during his short time on earth. “I remember a bigger than life personality, a firm handshake, a handsome guy with a quick wit and smile. He was loyal to all who knew him, loyal to his God and his country, for which he gave his life. No greater sacrifice can we salute. Semper Fidelis.”

As we pause to honor those who have made the ultimate sacrifice on this Memorial Day and all Memorial Days in the future, may we reflect on the life of one of our own, Melville Albert “Buzz” Lurth, Jr., a Comet who had a positive and lasting impact on all who knew him and countless others who have enjoyed life, liberty, and the pursuit of happiness in America because of the sacrifices made by Buzz and all U.S. military personnel.