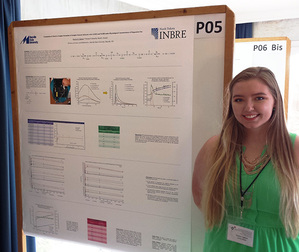 Mayville State University Professor of Chemistry Dr. Thomas Gonnella and his student, Katelyn Ogburn, presented their work at the 18th International Workshop on the Enzymology and Molecular Biology of Carbonyl Metabolism. The meeting was held in Sant Feliu de Guixols (Costa Brava, Spain), near Barcelona, from July 12 to 17, 2016.

Gonnella presented the work he has done with former Mayville State students and now graduates, Hannah Ness and Joseph Biggane. The title of their paper is “The Effect of Alda-1 on the Substrate Binding and Enzyme Activity of Mitochondrial Aldehyde Dehydrogenase 2 (ALDH2) at Physiological Concentrations of Magnesium Ion.”

Katelyn Ogburn presented the work on which she has collaborated with Thomas Gonnella and Wyatt Russell, a former Mayville State student and now graduate. Their paper is titled “Examination of Abortive Complex Formation of Straight-chained Aldehydes with ALDH2 and NADH under Physiological 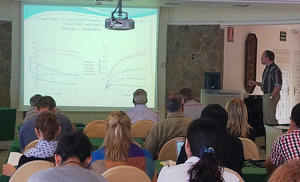 Katelyn’s poster presentation focused on a more comprehensive look at the influence the magnesium ion as on the ALDH2 activity toward a wide variety of simple class of reactive oxygen species found in cells. In his oral presentation, Gonnella focused on the similar topic with an ALDH2 activator introduced. Their work is supported by an Institutional Development Award from the National Institute of General Medical Sciences of the National Institutes of Health.

Dr. Gonnella surmised that the meeting was very productive. “Many of the leading researchers in this field were present and enthusiastic to discuss our results,” he said.

Gonnella and Ogburn are currently in the process of developing the manuscripts for publication.

The Carbonyl Meeting is held bi-annually, with the location alternating between the United States and an overseas venue. The workshop took place for the first time in Bern, Switzerland in 1982, and the last meeting was held in Pennsylvania in 2014.

The scientific focus of the meeting is on enzyme superfamilies involved in the metabolism and detoxification of carbonyl containing substrates: alcohol dehydrogenases (ADH) and other medium-chain dehydrogenases/reductases (MDR), aldehyde dehydrogenases (ALDH), short-chain dehydrogenases/reductases (SDR), and aldo-keto reductases (AKR). These enzymes elicit an enormous interest within the biomedical field, in areas such as alcohol abuse and alcoholism, hormone metabolism, diabetes, heart disease, cancer, and stem cell biology. Other areas of interest are animal models of disease, bioinformatics, expression profiling, functional genomics, metabolomics, and proteomics.

At the meeting, senior scientists delivered oral presentations, while students and postdoctoral investigators presented their work in poster sessions.

Top: Katelyn Ogburn presented the research of her team in a poster session during the Carbonyl Meeting held in Spain in July.

Bottom: Dr. Thomas Gonnella was a presenter at the Carbonyl Meeting this summer.