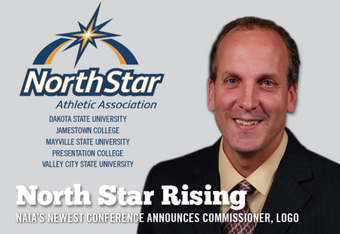 The newest conference in the NAIA has announced the selection of its inaugural commissioner. Cory Anderson will lead the North Star Athletic Association (NSAA), which will begin full operation with the beginning of the 2013-14 academic year. The NSAA also unveiled a new logo.

“We are so pleased that Cory Anderson is joining the NSAA as its first commissioner,” said Dr. Steve Shirley, president of Valley City State University and organizing chair of the NSAA. “Cory brings a tremendous breadth and depth of relevant experiences to our new conference. We anticipate a bright future and continued growth within the North Star that will benefit student-athletes and supporters of all our institutions, and we are confident in Cory’s abilities to lead the conference forward.”

Anderson comes to the NSAA with more than 25 years of experience in coaching, higher education, the private sector, and non-profit administration, including his most recent position as the Executive Director of the James River Family YMCA in Jamestown, N.D.  A 1989 graduate of Valley City State University (VCSU), Anderson worked in several capacities over the next 19 years in higher education.  He served as the head baseball and an assistant football coach at VCSU with additional responsibilities in enrollment services, sports information, and athletics administration.  Anderson previously served as a chair and rater for the North Dakota Collegiate Athletic Conference, Dakota Athletic Conference, and NAIA Region III.  In 2005, he was recognized as the first recipient of the NAIA Coach of Character Award for Region III.

“I am honored to be selected as the next commissioner of the North Star Athletic Association,” Anderson said. “It is an exciting opportunity to work with student-athletes, coaches, administrators, and fans in growing the NSAA. I plan to use my years of experience to enhance the opportunities for each conference member and to make a positive difference in the future development of the conference.”