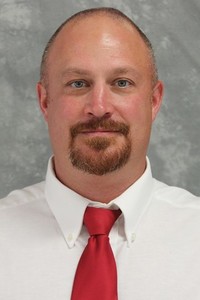 Jeff Larson has been named head football coach at Mayville State University. He will begin his duties in early March.

“We could not be more excited to have Coach Larson and his family join the Mayville State University family as our new head football coach,” said Mayville State Athletic Director Ryan Hall. “He brings a wealth of knowledge from the collegiate ranks and will be a great leader and ambassador for our program and community. We look forward to working with Coach Larson to bring Comet Football to the next level.”

“I am super-excited to get rolling and to attack the challenges of building a successful football program at Mayville State University,” said Jeff Larson. “Thank you to the search committee and MSU President Dr. Brian Van Horn for the opportunity. My family and I are looking forward to joining the wonderful and supportive Mayville-Portland and Traill County community.”

Larson has spent the past seven seasons as the defensive coordinator at Chadron (Neb.) State College. During that time, Coach Larson has been a part of teams that have compiled a 46-31 record and made an NCAA Division Two playoff appearance. The Chadron State Eagles have also had success in the classroom, winning the Rocky Mountain Athletic Conference Award for the highest team grade point average three of the past six academic years. Larson began his collegiate coaching career at Chadron State. Overall, he has been a part of collegiate football teams that have posted a 91-52 record.

Prior to joining the staff at Chadron State, Jeff Larson spent four seasons at Black Hills State University. He was defensive coordinator for three of those seasons.

Jeff Larson earned a master’s degree from Chadron State College and a bachelor’s degree from Northern State University, where he played linebacker for the Wolves in his hometown of Aberdeen, S.D.