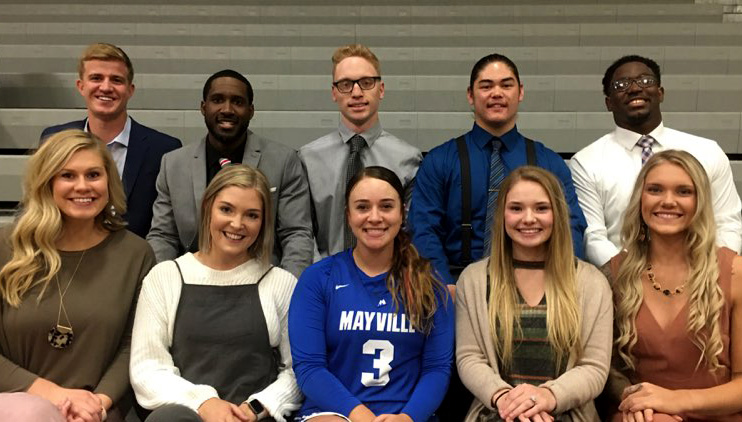 The Mayville State Student’s Activities Council planned a full slate of student activities that were held throughout the week, including the traditional homecoming lip sync contest. The queen and king were announced at the annual 8 O’clock Rock event, which is held to showcase the men’s and women’s basketball teams just prior to be beginning of their seasons. The event included audience participation activities, introductions of the members of the teams, and scrimmages.

Because of dangerous travel conditions surrounding a snow storm that dumped lots of snow and blizzard conditions on the Mayville-Portland area, the Alumni Association-sponsored homecoming events for alumni and friends were not held Oct. 11 and 12. With a lot of help from friends who shoveled the snow from Jerome Berg Field when snow subsided later on Oct. 12, the Comets football team was able to host Waldorf University for the homecoming football game on Sunday, Oct. 13. The game was originally scheduled to be played on Oct. 12. The 2019 Distinguished Alumni and Distinguished Service Award recipients and the Athletic Hall of Fame, Athletic Coaches Hall of Fame, and Performing Arts Hall of Fame inductees will be recognized at a later date to be determined.