Heroes, ranging from athletes, coaches, and military service men and women to musicians and speech and drama performers, were saluted and celebrated during Mayville State University’s 2015 homecoming festivities for alumni and friends, held October 16-18. The theme for the annual celebration was “A Salute to Our Heroes.” 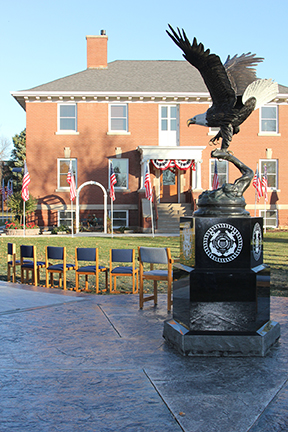 On Saturday, Oct. 17, former Mayville State cheerleaders gathered for a time of reminiscing and fun at the Edson and Margaret Larson Alumni and Leadership Center before joining in the traditional homecoming parade, which made its way through town, beginning at 10 a.m. Mayville State’s 1990 football team gathered at Mayville State to mark the 25th anniversary of their championship season, and participated in the parade as well as other activities. 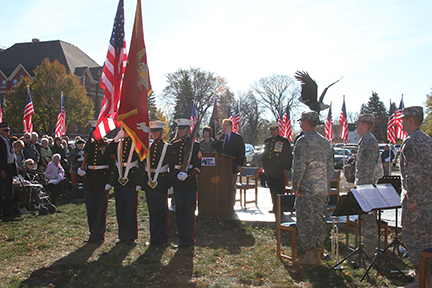 In his remarks, Bedard reflected on how his experiences at Mayville State formed the basis for his life of service. “We gave up the terms ‘I’ and ‘me’ for words like ‘team’ and ‘we’ and who we are together,” he said. “I think that really epitomizes what we do in our armed services. It’s about the team and what we do collectively.” 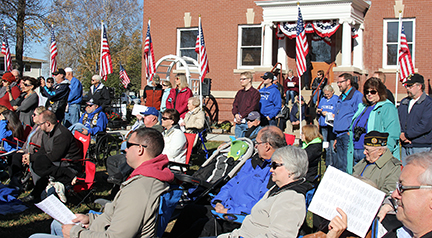 Bedard mentioned several of his college professors and all of the things they taught not only about their academic subject matter, but also about life in general. He commented on how his experiences as a college student at Mayville State have benefitted him throughout his lifetime. Only a percentage of the knowledge gained in college came from the classroom, he said. The rest came from living in the dorms, playing on the fields, and more.

He expressed his gratitude to his football coach, Jerome Berg, for the impact he had in his life, and he talked about his former college teammates, many of whom were military veterans. They brought the leadership skills they gained through their military service to the teams. 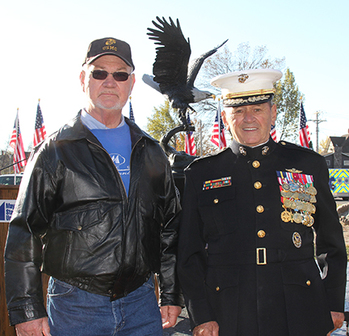 In addition, Lt. Gen. Bedard recognized his parents, who taught him to care about others, and taught him above all to understand that “there is a God bigger than all of us.”

Bedard reminded the crowd that there are thousands of men and women in harm’s way around the world protecting our freedoms on a daily basis. These are people to whom we owe a debt of gratitude, along with all veterans, including those recognized at Mayville State’s Military Honor Garden. 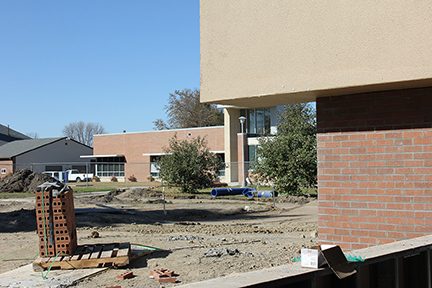 The program ended on a touching and solemn note, with program emcee, MSU Foundation Executive Director John Klocke, reading the names of each of the individuals who have been honored by loved ones in the Military Honor Garden project. The ringing of a chime followed each name. The trumpeter from the brass quintet ended the program by playing “Taps” from the upper level doorway of the Larson Center.

The Mayville State alumni of Pembina County/Hoople provided a complimentary all-American meal immediately following the program. Several of those who attended the dedication stayed around to enjoy lunch and fellowship at the Larson Center. See additional Military Honor Garden Dedication Ceremony photos and information. 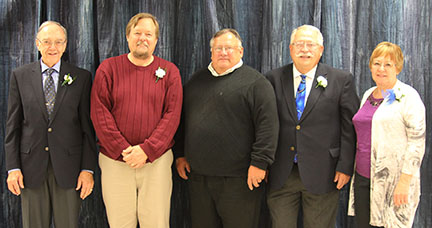 The Comets football team looked to continue their unbeaten streak in the North Star Athletic Association as they hosted the Jamestown Jimmies in the homecoming football game that afternoon. Mayville State was unable to overcome five turnovers in a 17-7 defeat. 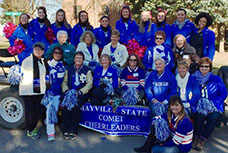 Alumni and friends had a chance to warm up and enjoy a picnic-style supper at the all-alumni homecoming reunion which followed the game at the Mayville Golf Course.

Mayville State alumni and Performing Arts Hall of Fame members Dennis Connelly, Mandan, N.D., Kris Eylands, Grand Forks, N.D., and Kirk Overmoe performed a number prior to performances by the MSU stage band, concert band, and concert choir. These nationally recognized musicians, together with Herb Thomson, who were all students at Mayville State in the 1970s, also joined in playing with the current Mayville State stage band during their performance.

Homecoming 2015 culminated with a social to honor the Performing Arts Hall of Fame inductees. Hosted by the Alumni Association board, the social was held immediately following the concert in the MSU Campus Center Luckasen Room.

“Homecoming 2015 was a very special time,” said MSU Director of Alumni Affairs Beth Swenson. “It was a heart-warming celebration of what makes Mayville State University special - the people. Heroes come in many different forms, and it was our privilege pay tribute to so many special Mayville State alumni and friends, our heroes, throughout Mayville State’s homecoming festivities.”

Second: This bronze eagle sculpture, which sits on a piece of granite engraved with the logos of each of the branches of the U.S. Military, was donated in honor of David Brown, a Mayville State graduate, by his wife, Valorie, and their family. The Edson and Margaret Alumni and Leadership Center can be seen in the background, situated north of the Military Honor Garden.

Third: Soldiers with the USMC Recruiting Substation, Fargo, and USMC Law Enforcement Detachment Co., Wahpeton, presented the colors at the beginning of the Military Honor Garden dedication program. Members of the Full Battle Rattle Brass Quintet of the 188th Army National Guard can be seen to the right.

Fourth: A crowd of about 200 people gathered to partake in the dedication of the Military Honor Garden on the grounds at Mayville State’s Edson and Margaret Larson Alumni and Leadership Center.

Sixth: This view of the campus comes from inside the new addition that has replaced the 1929 Old Gym building. The HPER facility replacement and expansion project is scheduled for completion in March of 2016.