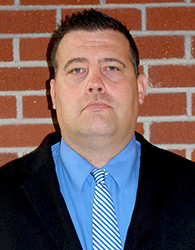 John Haines has been named head football coach at Mayville State University. His official start date is August 1, 2014. A 2000 graduate of Mayville State University, Haines returns to his alma mater after spending the last year as offensive coordinator at Central Methodist University in Fayette, Mo. Haines brings ten years of collegiate coaching experience to his new post as head coach for the Comets.

“We are happy to have Coach Haines return to Mayville State as our head football coach,” said MSU Athletic Director Mike Moore. “He brings a plethora of successful coaching experience, and we look forward to having him take the reins and build on the good foundation that has been established over the last short while. We’ve got great momentum, and we expect that the program will continue to grow.”

At Central Methodist, Haines served under former Mayville State head football coach Jody Ford. During his tenure, CMU set all-time school records in total offense, yards per carry, and first downs. The team was second-highest in school history in rushing, rushing yards in a season, and most points scored in a season. Central Methodist was among the top 25 in the NAIA in total offense, points per game, rushing offense, fewest sacks allowed, and first downs per game. The team grade point average for the 2013-2014 academic year was 2.9.

Coach Haines served as the offensive line coach at Lindenwood University in Missouri from 2009 to 2011, where he coached nine all-conference players, two All-Americans, and one Remington Award winner. During his time with the Lions, Lindenwood produced one of the most dominant offenses in the NAIA on an annual basis. In 2010, the Lions ranked in the top five of the NAIA in scoring per game (55 points), total offense per game (559 yards) and allowed only eight sacks, the third fewest in the NAIA. Haines helped guide the 2009 squad to an undefeated season, claiming both the Heart of America Athletic Conference (HAAC) and national championships. Lindenwood led the NAIA in total offense per game (512.4) and ranked in the top five of total rushing offense (2,715) and rushing offense per game (208.8). The Lions allowed only nine sacks, the fewest in the HAAC.

Prior to Lindenwood, Haines served as head coach at Vermillion (Minn.) Community College in 2008. Haines’ team posted a 9-3 record, won a MCAC conference championship, and was named the league’s and NJCAA Region 13’s Coach of the Year. Vermillion had the top-ranked statistical offense and defense in the conference.

Dating back to 2002, Haines has previous collegiate assistant coaching experience at Southwestern College, Mount San Jacinto College, College of the Redwoods, and Humboldt State University in California, as well as at Mayville State. He has coached two junior college All-Americans, and his offenses consistently ranked in the top 20 of the major statistical categories.

Haines earned a bachelor’s degree in physical education from Mayville State and a master’s degree in kinesiology from Humboldt State.