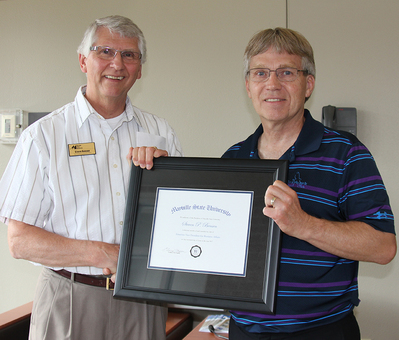 Longtime Mayville State University employee Steve Bensen was bestowed the distinction of Emeritus Vice President for Business Affairs upon his retirement, which is effective June 30, 2017. The announcement was made and a framed certificate was presented by MSU President Dr. Gary Hagen at a retirement party held for Steve at Mayville State on Tuesday afternoon, June 20.

“Steve’s assistance was vital in securing tens of millions of dollars in legislative funding over many biennia. His business acumen has been instrumental in positive financial outcomes for Mayville State. His feasibility study related to the coal-powered heating plant was pivotal. This new power plant solved the campus’s historic cash flow problems in one stroke. Steve’s work has been part of an unprecedented era of success in the history of Mayville State University.”