Ellen Chaffee will deliver the commencement address May 16 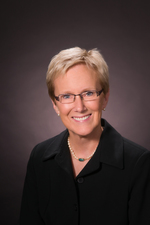 Current graduates Marcisa Johnson, Renton, Wash., and Amber Montag, Finley, N.D., will speak on behalf of the graduating class. Dr. Kevin Melicher, Fargo, N.D., member of the North Dakota State Board of Higher Education, will bring greetings on behalf of the Board; and Pastor Chris Hallanger from Mayville Lutheran Church will deliver the invocation.

Mayville State’s graduation day festivities will begin with the traditional graduation brunch, hosted by the MSU Alumni Association. The event will begin with socializing from 10 to 11 a.m. in the MSU Campus Center Foyer. A sit-down meal and program will begin at 11 a.m. in the Campus Center Luckasen Room. Graduates Patricia Lopez from Clarissa, Minn., Sarah Gandari from Borrowdale Harare, Zimbabwe, and Rochester Mugumbate from Mutare, Zimbabwe, will speak on behalf of the MSU Class of 2015. The members of the graduating class will be the guests of honor at the event. It is also open to MSU faculty and staff and friends and family of the graduates. Thanks to a generous sponsorship from Gate City Bank, there will be no charge to attend the graduation brunch.

Sarah Gandari has been a very active member of the Comets family while she in pursuit of Bachelor of Arts degree in social science with a minor in psychology. She is currently an intern working in community outreach in the Office of U.S. Senator John Hoeven. Sarah has held offices in a number of campus organizations, including Student Senate, Alpha Phi Sigma, and the Afrikan History Club. She has been a Peer Leader, Cometeer, and cheerleader, and a member of the Multicultural Club and International Student Task Force. Special honors include being named Writing Consultant of the Year in 2014 and a Student of the Year in 2015. She was named to Who’s Who Among Students in American Colleges and Universities in 2014 and 2015. A Dean’s List student, Sarah will graduate with cum laude honors. She is the daughter of Esther Gandari, Borrowdale Harare, Zimbabwe.

Patricia Lopez is earning a Bachelor of Science in Education degree, with a major in English and minor in psychology. She was recently named a Mayville State Student of the Year for the third-straight year. She was also named to Who’s Who Among Students in American Colleges and Universities in 2014-15. During the four years she’s been at Mayville State, Tisha has been a member of the Student Senate, as well as a participant in the music and theater programs. She has been involved with Student Ambassadors, Student Education Association, Peer Leaders, and Alpha Phi Sigma. She has invested numerous hours in community service projects. A Dean’s List student, Tisha will graduate with cum laude honors. She is the daughter of Deanna Clark of Clarissa, Minn.

Rochester Mugumbate will graduate with a Bachelor of Science degree in business administration with an accounting minor. A Dean’s List student and scholarship recipient, he has earned cum laude honors. Rochester has been an active member and award-winner in the Collegiate DECA organization, traveling with the MSU group to state and international competitions. In addition, he has served as president of the Multicultural Club and been a member of Campus Crusade, a Student Senator, and a Cometeer. He was selected to participate in the Larson Leadership Program as a freshman. Rochester is the son of W. and A. Mugumbate of Mutare, Zimbabwe.

Dr. Ellen Chaffee is a senior consultant for the Association of Governing Boards of Universities and Colleges (AGB), where she consults with governing boards and presidents. In addition, she is currently leading statewide academic transformation at the University of Maine System. As past president of Mayville State University and Valley City State University, she focused on innovation, change, and accountability. She chaired the board of a health care system as it merged to become a $2 billion organization. She is a trustee of Des Moines University.

Chaffee has held leadership positions in executive, academic, student affairs, research, and equal opportunity in research universities, comprehensive universities, and a state system. She has been president of two national professional associations and member of the national accrediting board for pharmacy education, received many state and regional awards, and published five books and dozens of articles on strategic management, governance, quality, innovation, and leadership. She earned a Ph.D. in higher education administration and policy analysis at Stanford University.

Marcisa Johnson came to Mayville State as a member of the women’s basketball team. She was named the Association of Independent Institutions (AII) most valuable player in 2013 and the North Star Athletic Association (NSAA) most valuable player in 2014. In 2013 and 2014, Marcisa earned the honor of being named a National Association of Intercollegiate Athletics (NAIA) All American. Marcisa has enjoyed volunteering her time at her church and coaching youth basketball. She will earn a Bachelor of Science in Education degree, with a major in mathematics and a minor in business administration. Marcisa is married to Kendall Johnson, and she is the daughter of Tina Carter and Marcus McMillan, Renton, Wash.

Amber Montag has been extremely active and successful in her work as a member of the MSU Collegiate DECA organization. She has served as local chapter president and treasurer, and was the Collegiate DECA state vice president in 2014-2015. She was a winner in state competitions and a top 10 national finalist in 2013 and 2014. Amber has also been involved on campus as a Peer Leader, Student Alumni Ambassador, Cometeer, and a member of the Title IX Comet Council and Campus Crusade. She was named a Mayville State student of the year in 2013, 2014, and 2015, and was recently received the Outstanding Business Student Award. A Dean’s List student and scholarship recipient, Amber will graduate with cum laude honors, earning a Bachelor of Science degree in business administration with a minor in sports management and a specialization in marketing/management. She is the daughter of Leon and Pam Montag of Finley, N.D.