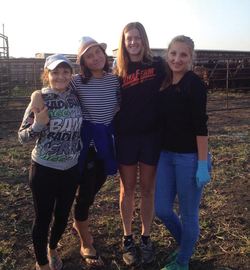 Riley Francis, Mayville State University senior and soon-to-be alumna, says she never would have thought at the age of 20, she’d be flying to the Voroenzh Region, Russia to be working with approximately 10,000 head of Black Angus cattle. As the school year closed and she participated in the commencement exercises at Mayville State on May 16, she no doubt had thoughts about the amazing experience she had last summer.

A close friend who has worked in Russia let her know about a Stevenson-Sputnik internship. He directed her to Darrell Stevenson, and after months of communicating back and forth and much paper work, she was ready to catch a flight to Shestakovo, Voronezhskaya Oblast’, Russia, three days after school ended in the spring of 2014. The main focus of the Stevenson-Sputnik operation is to increase beef production in Russia, as well as to provide jobs in villages where money is scarce.

After arriving in Russia, she was up on a horse by four a.m. gathering cows for syncing, and diving off a horse after roping a calf that needed to be treated.

Riley worked at three ranches throughout the summer. The Stevenson-Sputnik was the main ranch, and Angus Shestakovo and Zelony Lug were the others. Combined, these ranches run around 7,000 cows, 2,500 bred heifers, and 5,000 calves. This does not include the bulls that come through the Stevenson-Sputnik Ranch.

After Riley had been at Stevenson-Sputnik for about two weeks, the Brazilians, as well as the two other American interns, arrived. The Brazilians were unbelievably specialized in their own specific jobs with in vitro fertilization.

In addition to working with these ranches, Riley and the other interns worked with embryo transfer and artificial insemination at a ranch called Ekonvia. Ekonvia is the largest dairy in Russia. They run approximately 22,000 head and will be growing to 35,000. They are currently running 2,000 beef cows, but have room to grow to 5,000.

One of the biggest challenges for Riley during her internship was communication, as most of the Russians spoke little English. The Brazilian in vitro team with whom she worked spoke mainly Portuguese, and the Americans who were there didn’t have much of a handle on either language.

A villager by the name of Tymur has been part of the ranch from the start, and was a huge help in the communication barrier. Though he didn’t speak fluent English, he knew enough to help the Americans communicate what needed to be done.

Riley’s first trip into the village of Shestakovo was an interesting one.

She explained, “We drove past cattle and horses that I thought were roaming freely. I quickly found out that they had collar-like pieces hanging loosely around their necks and were tethered to large stakes that were stuck in the ground. Most of the cattle were multiple-purpose Simmental crossed with Holstein. They provided a supply of milk, butter, and meat for the local villagers.

“When we arrived in Shestakovo, we drove by a shanty-type building that looked abandoned. I was told, ‘Don’t get hurt. This is the hospital.’ When I was informed that this building that was falling down was where I’d receive medical attention if there would happen to be an accident I figured all bets were off,” said Riley.

While touring the village, Riley realized how poor this area of Russia truly was, which made her very grateful to live where she does.

She once offered a cowboy a candy bar after a hard day at work. He replied with a “no,” and then pointed at his teeth. The reason for not eating anything with sugar came from the fact that the people have no access to dental care.

Riley inquired with her boss regarding the elderly people sitting outside their houses everywhere around the village. She wondered why they weren’t working. Her boss’s reply sent her head spinning.

“They are people whose children didn’t go off and become rich in order to pay for their medical bills,” he said. Many couldn’t walk or stand for long periods of time because they weren’t able to afford hip replacements.

Francis considers her internship in Russia to be “a dream come true.” “Though my time in Russia was short, I believe it was an experience that I’ll never forget. The people I met and the memories that were made were amazing, and if given the chance, I would return. I am truly grateful to Darrell Stevenson for allowing me to have such an amazing experience, and to my parents, Eugene and Roberta Francis, and other family members and friends who helped me every step of the way in reaching a goal I had always thought was out of reach.”

Riley plays an integral role on her family’s cattle farm, Millvale Shorthorns, near Fordville, N.D. She will complete the requirements for a Bachelor of Science degree from Mayville State in December of 2015. She will earn a major in biology and a minor in chemistry. In addition to being a good student, Riley is a member of the Mayville State volleyball team and the MSU concert choir, concert band, and jazz band. She plans to pursue a bio-medical degree in medical science from North Dakota State University in May of 2016.

Photo Caption: Riley Francis (third from left) is pictured with others who interned on a cattle ranch in Russia last summer.