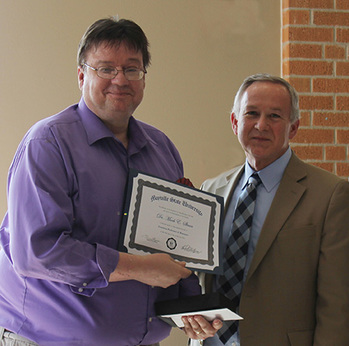 Commencement 2016 will mark the end of a 25-year career at Mayville State for Dr. Mark Skean. Skean came to Mayville State as a faculty member in the Division of Business and CIS. He is currently a professor of business and CIS and also holds the title of Director of Academic Assessment.

Mark says a highlight of his career has been the opportunity to participate in many grant activities focused on improvement in student learning. Skean and several of his colleagues have presented their findings in this area both domestically and abroad.

Most of the changes Mark has experienced during his career deal with technologies. He says, “Many uses of technology are really creative slants on traditional educational frameworks. ‘Learning agility’ is the characteristic new college graduates need to possess most. Yes, that has always been the primary contribution of young professionals to existing or startup organizations. Competence with the ‘3Rs,” along with a comfort level in creative experimentation with technologies, is the basis from which learning ability is developed.”

Dr. Skean has been granted the title Professor Emeritus of Business and CIS. This was announced during an all-campus celebration for retirees held May 5. In addition, division chair Gene Levitt presented Skean with an MVP ribbon and said, “You have become the guru of academics and assessment. You are a star, a ‘Big Man On Campus,’ and in terms you may understand, a ‘Most Valuable Player.’”