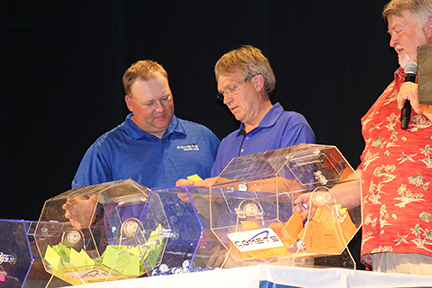 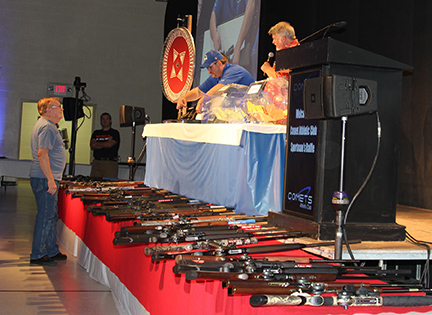 The highlight of the evening was the drawing for 60 guns that were given away to individuals who had purchased raffle tickets for a chance to win. The event was attended by about 300 people who enjoyed dinner and had an opportunity to participate in a variety of other raffles with the chance of winning some terrific prizes.

“We at Mayville State extend our since thanks to all who played a part in the success of the eighth annual Sportsmen’s Raffle,” said Mayville State University President Gary Hagen. “This activity is extremely important to Mayville State, and specifically Mayville State Athletics.”

Dick Viken of Mayville was the lucky winner in the special raffle of a Rock River LAR-15 Varmint w/4-16x56 scope. Those who attended the event could purchase chances to win the opportunity to choose one of three keys that would potentially open a gun lock that was securing the gun. Dick was the winner of the first round and was lucky enough to choose the winning key. Had the key not opened the lock, the raffle would have progressed for one or two more rounds, depending on the outcome of the second round.

The Comet Athletic Club Sportsmen’s Raffle is held each year to raise funds for scholarships for Mayville State’s student-athletes. Tickets for the gun raffle are sold for $100 each. A limited number of tickets is sold each year, allowing for a one-in-10 chance to win a gun.

“We are grateful to the many people who purchased raffle tickets and participated in the raffle event activities on September 6,” said Comet Athletic Club board president and Sportsmen’s Raffle organizer Mark Kloster of Mayville. “We also extend our sincere thanks to Tom Moe, who served as our emcee for the evening, to Finley Motorsports, Valley Plains Equipment, Titan Machinery, Scheel’s, and the Mayville Golf Club for their support, and to the Comet Athletic Club board members who worked hard to make it happen. A special ‘thanks’ goes out to Chad Hanson of Chad’s Excavating for being our overall event sponsor. With his support, we’ll be able to have an even great impact with student scholarships raised through our event.”

The list of winners in the 60-gun giveaway follows:

Top: Mayville State University President Dr. Gary Hagen (center) draws the winners in the ATV raffle. Mark Frost of Hope, N.D. was the winner of the 2014 Polaris Ranger XP. Several others won consolation cash prizes in the raffle. Comet Athletic Club president, Mark Kloster, is on the left. Event emcee, Tom Moe, is on the right.

Bottom: Dick Viken was the lucky winner of a Rock River LAR-15 Varmint. Richard won the chance to choose one of three keys, and chose the one that opened the gun lock, which meant the gun was his to keep! Comet Athletic Club board member Mike Carr (center) is shown opening the lock. Event emcee Tom Moe is pictured on the right.