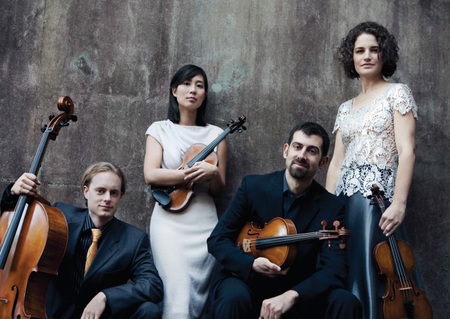 Mayville State University and Community Fine Arts Series presents the Chiara String Quartet Monday, Oct. 24, 2016 at 7:30 p.m. The concert will be held in the MSU Classroom Building Auditorium and will feature works by Benjamin Britten, Franz Schubert, and Ludwig van Beethoven. Tickets are available in advance or at the door on the evening of the concert. Tickets for adults are $13, and tickets for those under age 18 are $5. MSU students are admitted free of charge with university identification. Adult Fine Arts Series season tickets are available for $60. Season tickets for those under age 18 are $25. Call 701-788-4742 for more information about season tickets or advance single concert tickets.

A pre-concert social will be held from 6;30 to 7:00 p.m. at Mayville State University's Edson and Margaret Larson Alumni and Leadership Center, located at the corner of Third Avenue and Stan Dakken Drive. All are welcome.

The Quartet spent a two-year residency in Grand Forks under the Guarneri Quartet Residency Award for artistic excellence by Chamber Music America. Arriving in September 2000 and having just formed, the Quartet not only sharpened their style and learned repertoire, they transformed chamber music in the region. The strings program blossomed at both the University of North Dakota and the local Symphony Orchestra. Today the Chiara has established itself as among America's most respected ensembles, lauded for its "highly virtuosic, edge-of-the-seat playing" (The Boston Globe). They are currently Hixson-Lied Artists-in-Residence at the Glenn Korff School of Music at the University of Nebraska, Lincoln and were the Blodgett Artists-in-Residence at Harvard University from 2008 to 2014. For the 2015-2016 season, the Chiara was quartet-in-residence at New York's Metropolitan Museum of Art, as prestigious a residency as exists.

They have collected many awards, including the Jefferson Friedman's String Quartet No. 3 for a Grammy Award in 2011 and the ASCAP/Chamber Music America Award for Adventurous Programming for the 2010-2011 season. Others include a top prize at the Paolo Borciani International Competition, winning the Astral Artistic Services National Audition, and winning first prize at the Fischoff Chamber Music Competition. The Chiara Quartet has also been the recipient of grants from the Meet The Composer, The Aaron Copland Foundation, and the Amphion Foundation.

The Quartet is known for playing its repertoire from memory. In addition to playing without printed parts, as demonstrated on the albums "Brahms by Heart" and "Bartok by Heart," the Chiara also performs in a variety of venues, such as bars and nightclubs, following its bywords, "chamber music in any chamber."