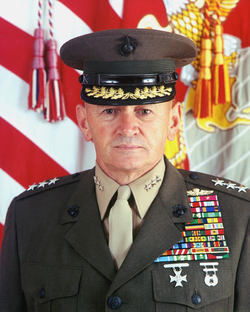 As part of Mayville State University’s homecoming festivities, the annual ceremony of remembrance at the Mayville State University Military Honor Garden is planned. The program will begin at 11 a.m. Saturday, Sept. 29 at the garden site located on the south lawn of the Edson and Margaret Larson Alumni and Leadership Center at Mayville State University. The ceremony will include the reading of the names of all who have been recognized in the garden and remarks from 1965 Mayville State graduate Lt. Gen. Emil R. “Buck” Bedard, USMC (Ret.). There will be a special commendation recognizing the 100th anniversary since the ending of WW I and a 50-year commemoration of the Vietnam War. The Mayville American Legion Post #8 will have their “Avenue of Flags” on display, and music will be provided by the First & Farmers Filharmonic. All alumni and friends are cordially invited to attend the ceremony and are asked to bring a lawn chair if they wish to be seated during the program.

Lt. Gen Emil R. “Buck” Bedard retired in Dec. of 2003 with more than 37 years of active service. His last position filled was Deputy Commandant for Plans, Policies, and Operations.

Since retiring he has served as a senior mentor with U.S. Joint Forces Command and in this capacity he has provided advice and counsel to major military commands around the globe. He currently serves as a vice president, American Systems Corp. He is on the board of directors of a publicly traded company and two privately held companies and also serves as a consultant and advisor to a number of corporations.

The Anderson-Hefta American Legion Post #93, Portland, N.D., is a Commemorative Partner in the “United States of America Vietnam War Commemoration” program. As part of the ceremony of remembrance at the Military Honor Garden, a special recognition will be held to honor all veterans who served on active duty from Nov. 1, 1955 to May 16, 1975, regardless of location. Those veterans who served during this time and are at the ceremony of remembrance will be presented with a Vietnam veteran lapel pin, as a token of appreciation from a grateful nation.

The Military Honor Garden features a life-sized bronze eagle in flight sculpture, flags, night lighting, and gardens. All five branches of the military are represented on the granite centerpiece on which the eagle sculpture stands. This beautiful and meaningful project is a tribute to Mayville State employees, students, and friends, and community men and women for their patriotic service in America’s Armed Forces. The intent is to honor anyone who has served in the military. Those honored definitely can be, but do not have to be, Mayville State alumni.

Many people have made gifts of $500 or more to the project so that they can have the name(s) of their loved ones engraved on granite plaques that are incorporated into the memorial walk. In addition, the late Valorie Brown, Cavalier, N.D., donated the amazing bronze statue depicting a life-sized bald eagle in flight in memory of her husband, David G. Brown, a 1971 graduate of Mayville State who passed away several years ago. Two beautifully engraved granite benches flank the eagle statue. One was donated by Dixie and Larry McGillis in honor of Dixie’s dad, Edwin, and his six brothers, all who served in World War II, and all who came home to Edmore, N.D. The second bench honors and remembers all American military recognized as KIA, POW, and MIA. The bench was provided by friends and teammates of Melville “Buzz” Lurth, Jr., who graduated from Mayville State in 1968 and was killed in Vietnam in 1969.

There is room for expansion at the Military Honor Garden. If you’d like to sponsor a granite plaque in honor of a loved one, please contact the MSU Foundation staff at alumni.mail@mayvillestate.edu or 701-788-4864 to learn more. You can also see more information and make your gift online at www.mayvillestate.edu/militaryhonorgarden. When you purchase an engraved plaque to be placed in the Military Honor Garden, a portion of the funds will be used to support a new veterans scholarship fund at Mayville State.