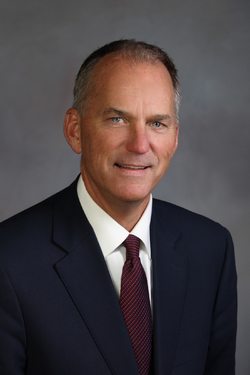 Mayville State’s graduation day festivities will begin with the traditional graduation brunch, hosted by the MSU Alumni Association. A sit-down meal and program will begin at 10:30 a.m. in the Campus Center Luckasen Room. Graduates Miranda Petersen from Mayville, N.D., Annjeanett Urbano from San Diego, Calif., and Bethany Larson from Grafton, N.D. will speak on behalf of the MSU Class of 2019. The members of the graduating class will be the guests of honor at the event. The brunch is also open to MSU faculty and staff and friends and family of the graduates.

Annjeanett Urbano is graduating with a Bachelor of Arts degree in applied psychology. She has earned a minor in sociology. Annjeanett played softball for the Comets from the fall of 2016 through this spring season. She was also a member of the MSU cheer team in 2016-2017. Annjeanett's hometown is San Diego, Calif. Her parents are Judith Perez and Raul D. Urbano.

Prior to becoming CEO of Altru Health System, Wehe had served as Chief Operating Officer with the organization since 2011. He has been affiliated with Altru since 1989.

Joelle Ertl is graduating with a Bachelor of Science degree. A Dean’s List student, she has earned cum laude honors and has completed the requirements for majors in Fitness and Wellness and Health. Ertl served as captain of the Comets women’s basketball team from 2016 to 2019, and has been a summer camp leader since 2015. She has been active as the North Star Athletic Association (NSAA) Board of Student Athletes representative and she served as Mayville State’s Student Athlete Advisory Committee vice president in 2016-2017 and president in 2018-2019. A volunteer extraordinaire, Joelle has received numerous accolades as a student and an athlete. She was named the MSU HPER Student of the Year and was also a nominee for MSU Student of the Year in 2017-2018. She earned NAIA Scholar Athlete and Daktronics Scholar Athlete honors in 2017-2018 and 2018-2019. In addition, she was named NSAA Women’s Basketball Player of the Year, an NSAA Champions of Character award winner, an NAIA Third Team All-American, and an NSAA Women’s Basketball First Team All-Conference player in 2018-2019. Her parents are Ed and Deb Ertl, Avon, Minn.

Jacob Leier is graduating with a Bachelor of Science in Education degree. He has earned majors in secondary math education and chemistry. A Dean’s List student, Jacob was named the Outstanding Teacher Education Student at Mayville State in 2018-2019. In addition, he was named an MSU Student of the Year in 2016-2017 and 2017-2018. His volunteer activities include working with youth and high school basketball camps, as well as the Feed My Starving Children and Operation Christmas Child organizations. A scholarship recipient, Leier served as Mayville State CRU president this past year and has been a worship leader for the group since 2017. He was a student assistant for Comets men’s basketball from 2017 to 2019, and was active on campus as a Student Athlete Advisory Committee member and math tutor in 2016-2017. He is the son of Darren and Brenda Leier, Thief River Falls, Minn.