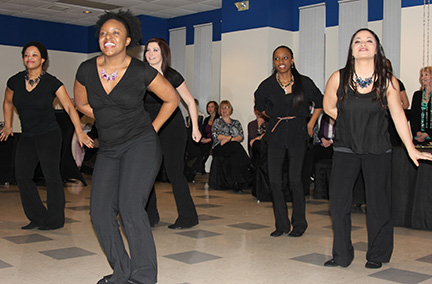 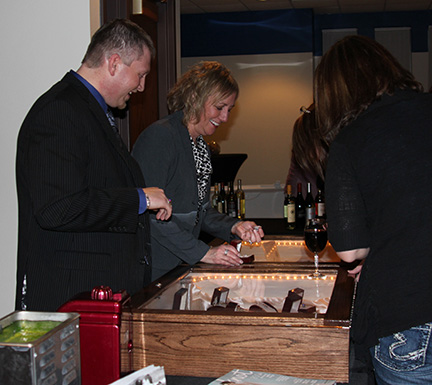 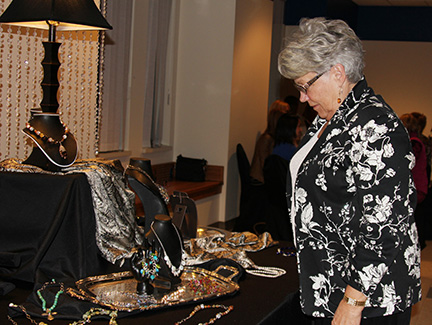 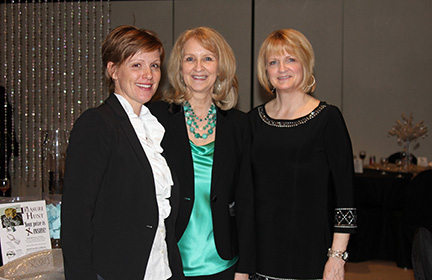 When Tracy McGillis of Mayville arrived at the “A Sparkling Affair” event at Mayville State University Thursday evening, February 20, her friends greeted her with a tiara and sash that she would wear as she celebrated her 40th birthday at the gala event. Little did she know that the tiara and sash were just the beginning of even brighter things to come in an evening fit for a princess.

For a $20 donation, those who attended “A Sparkling Affair” had the opportunity to put their names into the drawing for three fabulous jewelry grand prizes. The prizes, donated by Riddle’s Jewelry, were a one-carat diamond pendant ($7,000 retail value), a Comet blue diamond ring ($1,100 retail value), and a ladies watch ($400 retail value). Each of the prizes was contained in a treasure box and the contents would not be revealed until selected by a lucky winner. Highlights of the sparkling evening included a dance routine performed by the Mayville State University cheer team, who wore jewelry items that were beautifully handcrafted by Jennifer Kohls and Debbie Hagen while they danced. MSU Director of Development John Klocke entertained guests as they arrived for the evening with his love songs performance in the Campus Center Foyer.

As the evening progressed, anticipation of the grand prize treasure chest drawing grew. In the meantime, guests enjoyed fabulous hors d’oeuvres prepared and served by Christine Holweger and her assistants while visiting and hoping that their names would be called during the door prize drawings for 25 jewelry items that had been beautifully handcrafted by Kohls and Hagen. Not only did Jen and Debbie donate their time and artistic talent to creating these pieces, they donated the materials that went into making them as well.

shopping spree at Riddle’s. When all was said and done, winners of the shopping sprees were Amy Sand and Shirley Rux. In a bonus surprise, a third drawing for a $500 shopping spree was won by Becky Gunderson.

At last, the grand finale to a wonderful evening had arrived - the drawing for the Riddle’s Jewelry prizes. Those in the room nearly held their breath as MSU Director of Development John Klocke and manager of the Grand Forks Riddle’s Jewelry store, Shane Raw, prepared to draw the first name. The room erupted with shouts of joy as Klocke read, “Tracy McGillis!”

This meant that the birthday princess had first choice of the three treasure boxes available. She made her choice and the crowd waited in eager anticipation as she opened the box to reveal that she had chosen the top prize, the one-carat diamond pendant. Again, the crowd exploded in cheers of happiness for Tracy, and everyone renewing their faith in the old adage proclaiming that “dreams really do come true.”

Juneal Moen’s was the second name drawn in the grand prize drawing. She chose the treasure box containing the rose gold and diamond watch. Melissa Bring’s was the third name drawn, which meant she had won the Comet blue diamond ring.

More than $9,000 was raised through “A Sparkling Affair” on Feb. 20. Proceeds will be used to assist the hospitality project at the Larson Center. The purpose of the hospitality project is to purchase items needed for hosting gatherings at the facility. Historic Northwest Hall, located on the campus of Mayville State University, has been renovated for use as an alumni and leadership center. The official grand opening of the center, the Edson and Margaret Larson Alumni and Leadership Center, will be held in conjunction with Mayville State University’s 125th anniversary Alumni Days celebration in June of 2014.

“We are thrilled with the results of this year’s ‘A Sparkling Affair,’” said Debbie Hagen, one of the event organizers. “This has been a very fun and exciting way to raise money for our much-anticipated alumni center. Thank you to all who purchased tickets, attended the event, and who helped in any way. We look forward to enjoying the fruits of our labor in the new alumni center.”

“‘A Sparkling Affair’ organizers Debbie Hagen, Jennifer Kohls, and Loree Stenehjem have been working for months to prepare for this very successful event, which was simply ‘brilliant,’” said MSU Director of Development John Klocke. “We truly appreciate their generosity and hard work that is so important to Mayville State University. Thank you to Riddle’s Jewelry for sponsoring the event for the second year, and for increasing their prize package from $4,570 in 2013 to $9,500 this year. Wow! We are incredibly fortunate to have so many wonderful Mayville State supporters!”

Top: Tracy McGillis (far right) was absolutely stunned when she opened her treasure box to reveal that she had one a one-carat diamond pendant, the grand prize in the treasure hunt game at “A Sparkling Affair.”

Second from top: The crowd enjoyed the Mayville State University cheer team’s dance performance choreographed to the song “Shine Bright Like a Diamond.”

Third from top: Representatives of Riddle’s Jewelry (left) attended the “A Sparkling Affair” event and offered free jewelry cleaning and the opportunity to view some of the jewelry they have available for sale in their stores. Riddle’s Jewelry sponsored “A Sparkling Affair” for the second year in a row, donating two $500 shopping sprees, as well as a one-carat diamond necklace, a Comet blue diamond ring, and a rose gold and diamond watch.

Fourth from top: Rosie Thoreson was a lucky door prize winner and is shown here choosing her prize from a number of jewelry prizes that had been handcrafted and donated by Jennifer Kohls and Debbie Hagen.

Fifth from top: A number of women offered their assistance in a variety of ways, including as models of jewelry, at the “A Sparkling Affair” event. Pictured in the back from left to right are Billie Soholt, Jennifer Kohls, Dawn Kaldor, Tracy McGillis, Mindy O’Connor, Denise Bergstrom, Heidi Krivarchka, Annette Bakken, Cleone Whelan, Jackee Lerol, and Debbie Hagen. In the front (l-r) are Loree Stenehjem, Mary Ellen Kirking, Kara Schreiner, Linda Baier, Leah Larson, Jen Nepstad, and Jenell Braseth.

Bottom: Jennifer Kohls, Debbie Hagen, and Loree Stenehjem (l-r) organized a fabulous “A Sparkling Affair” again this year. The first “A Sparkling Affair” was held in 2013. Proceeds are being used to benefit hospitality projects at the soon-to-open Larson Alumni and Leadership Center at Mayville State University.