Westcoast to the Midwest, What’s the Difference? 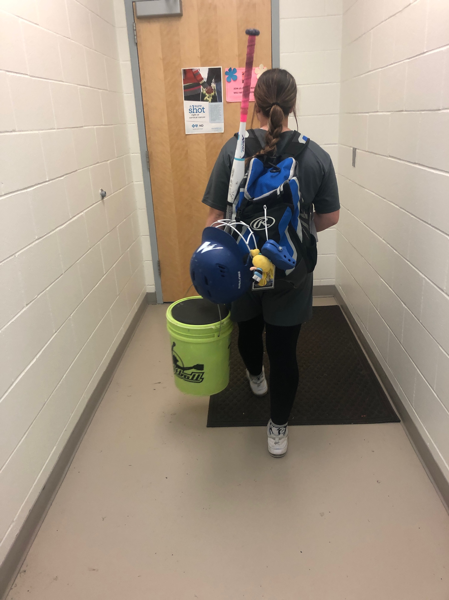 Moving from California to North Dakota took a lot of courage, especially from someone who has never been away from home. The two-sport athlete came to Mayville on a softball scholarship and later got picked up by the basketball team. She was welcomed with open arms from both teams.

“I’ve always played both basketball and softball” Junior student athlete Alissa Foster stated, “being able to play both at a four-year school has always been a dream of mine.”

Foster came into Mayville fall of 2018. She has an older brother who also traveled from California to play baseball at the school, so she had an idea of what the town was going to be like before arrival.

“At first I didn’t want to go to Mayville State because my brother went there” Foster said, “But when he told me it would be fun if I came, I knew my decision was made”

“It made my mom happy too, she is able to follow both of our sports and will always know we have each other.” Foster stated.

As a two-sport athlete, Foster’s schedule has rarely had any downtime. When she first arrived to the school, she balanced two practices and four classes each day. Once basketball games started, she still didn’t have a break. She still attended practice for one sport while she was playing in the other.

“I thought I was used to playing two sports because I did it in junior college, but when I got here I got a reality check.” Foster stated.

Prior to sports at the school, when Foster first arrived at Mayville she had mixed emotions. The feeling of being away from her parents made her miss home even more. Coming from a big city to a small town was a reality check for her.

“My brother told me what the town was like, but I had no idea what to really expect.” Foster stated, “when I realized how small the town was I didn’t know if I would like it here or not.”

“Adjusting to the small town wasn’t so bad.” Foster stated, “Once I made more friends here I felt right at home.”

After the first few weeks of being in a new town, Foster got used to her new place of living. She continued to play both sports and make new friends along the way. Her contributions to both teams have made her experience at Mayville a good one.

The transition from home to a new place could be very hard on some people. In this case, by surrounding yourself with good company it could make the changed a lot easier.

“Coming to Mayville was one of the best decisions I’ve ever made.” Foster stated, “I’ve made lifelong friends, and unforgettable memories.”

“Being able to go to school with my brother is something that made my decision to come to Mayville easy.” Foster said, “it’s like I have a little piece of home because I have some family here with me.”