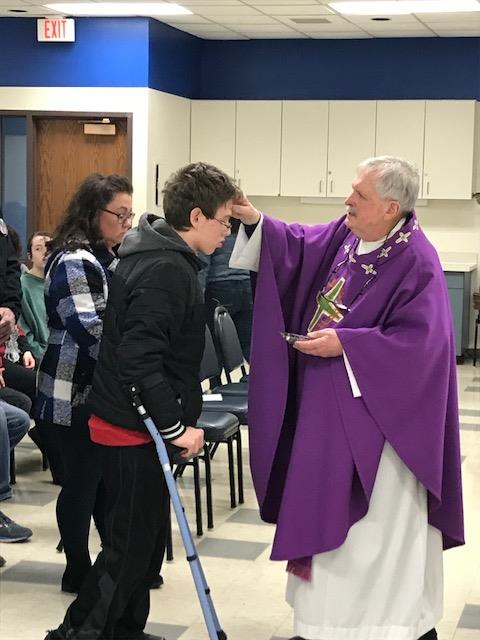 Roman Catholic Priest of Our Lady of Peace Church in Mayville ND, Fr. Daniel Pilon, hosted Ash Wednesday Mass on February 14 in the Luckasen Room on the campus of Mayville State University.

Approximately fifty people consisting of on and off-campus students, and also local community members attended the Ash Wednesday service in celebration of the season of Lent. A Catholic Mass being held on campus is not something that happens on a regular basis, however, Father Pilon wanted to maintain the religious tradition that has been around for years. He does not know when this started, but he has been doing this personally for about six years. This is significant to Father because Ash Wednesday marks the official beginning of Lent. Lent is a time in Christianity when people reflect upon the mystery of Jesus’s death and humble themselves by devoting more time to prayer, fasting from snacks, abstaining from red meat on Fridays, and performing works of charity to help the unfortunate.

Father Pilon gave the history of Ash Wednesday by stating, “It is the beginning of a season full of penitence and renewing ourselves. The ashes are a smaller version of what people did in the Old Testament to express sorrow for sins. It signals our desire to begin the season of renewal and penitence.” When asked why this day is so important for the current culture, Fathers response, “We must recognize the most dangerous thing for any culture to do is become selfish and absorbed, in order to be more loving to people we need to recognize our faults and serve God.”

Father Pilon gave a sermon that talked about the importance of remembering that Christians were not the center of the universe, and that they need to put the needs of others before their own. Father Pilon traced a cross on each person’s forehead and said, “You are dust, and unto dust you shall return”, calling to mind the creation of Adam in the book of Genesis, and the inevitability of death caused due to sin. Afterwards, he consecrated the bread and wine and each Catholic person received Holy Communion in order to receive spiritual strength for the forty-day Lenten period. Father Pilon ended the Mass by blessing the congregation, for faithfully following the gospel.

One non-Catholic student commented that he had been to a Catholic Mass before and really enjoyed his time participating in the service.