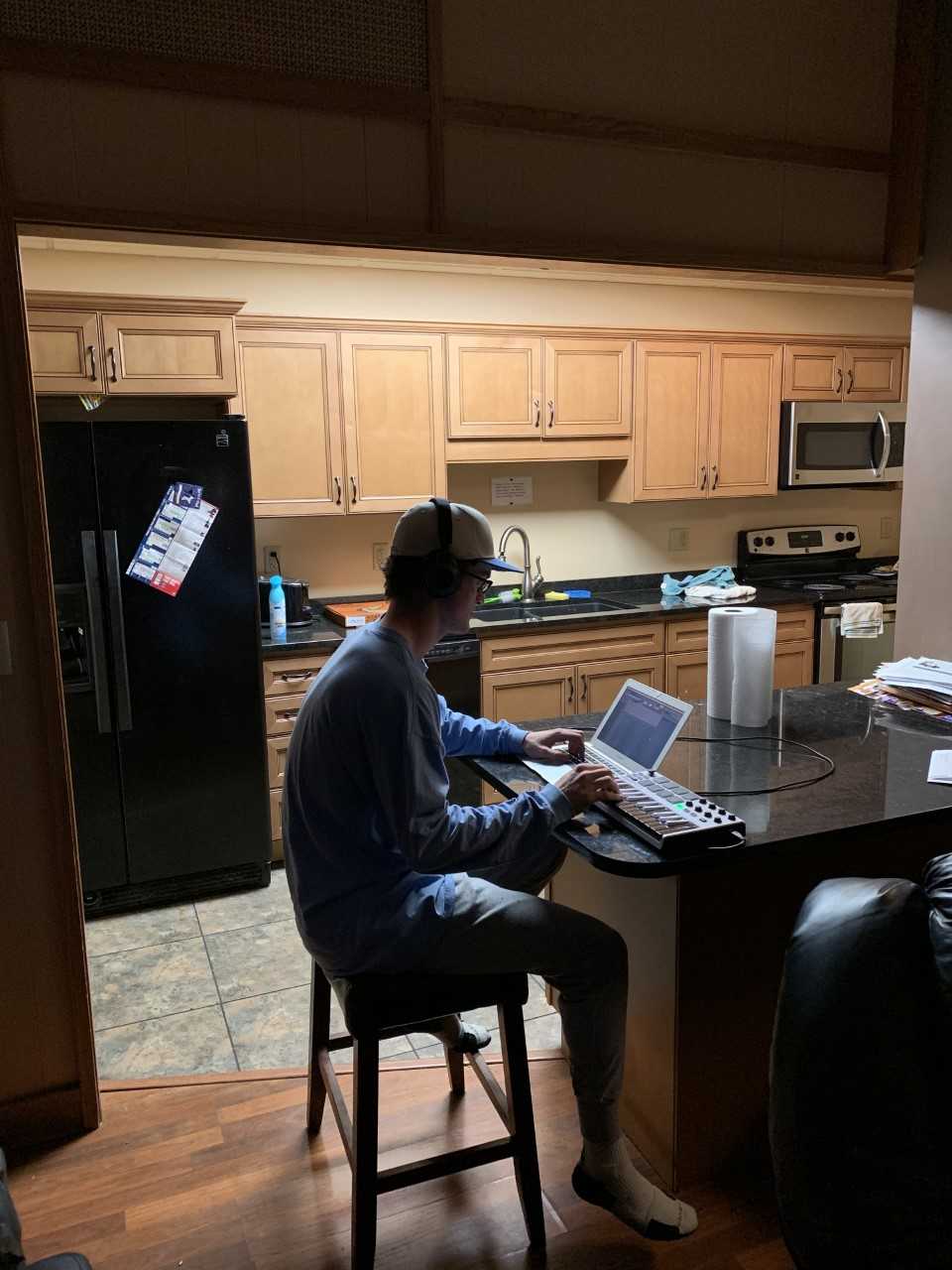 Tait Ludwick creating new beats while in the comfort of his home. (Austin Herrington)

Music has always been served as entertainment for people alike. But for others, it is used for something much more than entertaining themselves.

From creating beats to just listening to music putting you in good vibes has become enormously popular for people these days.

Tait Ludwick is a Student-Athlete who plays baseball for Mayville State University and has been listening to music and creating beats ever since he could remember.

Ludwick grew up with a lot of music with him. It first started at a young age for Ludwick, an age where for most you wouldn’t consider music being that huge for a child.

“The song ‘Reason’ by Hoobastank was the first song that I ever felt emotions to” said Ludwick. “It wasn’t anything bad, but I just never felt happy from a song and that’s where it all started for me” Ludwick said.

Hearing that song made him branch out to a lot of other genres to find songs that made him happy in the same way that song did.

Ludwick’s father was his biggest influencer about music and what his dad liked, he instantly liked as well.

When he started growing older, he started to realize that he had a strong connection with music. He realized it was because of the beats in the songs that made him enjoy music more instead of the lyrics behind the song.

Ludwick then started to make beats to get his ideas portrayed in a way he loved.

“I started making beats because I constantly create beats in my head and thought to myself, I should start recording them” Ludwick said.

Making beats was a way he could express himself that didn’t make him feel like he had to impress anyone but himself.

One of the most important tool Ludwick uses to express himself through music is playing baseball.

“I love getting psyched to play baseball games, so certain genres help me get pumped easier” Ludwick said. “For example, if I’m too relaxed heading into a game, I would listen to some rap, it just depends on how I’m feeling that day” Ludwick said.

Baseball has helped Ludwick look on the horizon with genres of music. At his high school, they would play a lot of country which then made him appreciate country. Then once he left, he started to listen to a lot of hip hop and rap.

Though he lives with Ludwick, Lizarraga doesn’t mind the music he plays because he also enjoys what he plays.

“I have heard some of his beats and he has real talent” said Lizarraga. “I think if he really pursued himself, he could maybe do it as a profession” Lizarraga said.

With all the music Ludwick listens to, its hard to find artists he loves more over others. But if he had to choose three it would be Kid Cudi, Travis Scott, and Frank Ocean.

Each of them is unique to him in his own way.

“Kid Cudi is so easily relatable and he makes music for you to feel happy, Travis Scott is such a diverse artist and knows how to properly produce music and Frank Ocean will put you in a whole different paradise mentally” said Ludwick.

When it comes down to the nitty-gritty, Ludwick loves making beats over listening to music.

“I love to find new sounds” Ludwick said. “It takes me a little while to make a beat, but the struggle is so worth it” Ludwick said.

Though it can be time consuming to him, it is all worth it for him in the end.

“When you make a beat that took time, it makes you appreciate it” Ludwick said. “You really start falling in love with your music, because a song/album is like your child” Ludwick said.

At the moment, Ludwick is still playing baseball and getting his degree in school while doing the thing he loves which is making beats and listening to music.

Ludwick believes with time, comes great things and he hopes one day he can continue to make beats for other to love to listen to.

I guess you could say he is one with the art of music.