Public invited to participate in discussion on Armenian Genocide 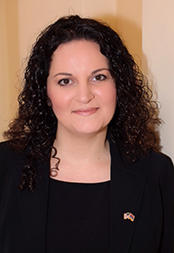 Anna Astvatsaturian Turcotte, an Armenian refugee from Baku, Azerbajan, will share her story at Mayville State University Friday, Feb. 20, 2015. The public is invited to meet Anna and participate in the discussion that will take place at the MSU Campus Center Luckasen Room from 10:00 a.m. to 1:00 p.m. Feb. 20. Those who attend should feel free to bring their lunch along or purchase lunch at the MSU Dining Services and come and go as their schedules allow.

Anna Astvatsaturian Turcotte is a writer, lawyer, and lecturer. After fleeing Baku in the fall of 1989, Anna and her family spent two and a half years in Armenia as refugees before coming to the United States in 1992. After graduating from law school, Anna was one of the first Americans to clerk at the International Criminal Court (ICC) in The Hague, Netherlands after working on and observing the ICC’s creation at the United Nations.

In 2012, Anna published her book, Nowhere, a Story of Exile, which she wrote between the ages of 14 and 16 as her family settled in North Dakota. The book is based on the childhood diaries she kept as her family was fleeing Baku, Azerbaijan and during life in Armenia as a Baku refugee.

In September of 2013, Anna became the recipient of Mkhitar Gosh Medal, Republic of Armenia’s highest civilian honor awarded by President Serge Sargsyan for exceptional achievements in the political-social spheres, as well as outstanding efforts in the fields of diplomacy, law, and political science. In 2013, Anna also received a Gratitude Medal from the President of Nagorono-Karabakh Republic, Bako Sahakyan.

Anna spoke about the plight of Armenians of Baku and Nagorrno-Karabakh on Capitol Hill in Washington, D.C. and in the European Parliament in Brussels, Belgium. Armenia, Nagorno-Karabakh, ICC, and human rights issues are her lifelong passions. She strives to reach out to the needs of the people of Armenia, Nagorno-Karabakh, and the Armenian Diaspora. Anna travels around the world, writing and lecturing on topics that are dear to her heart. She currently works in banking regulatory reform and lives in Maine with her husband and their son and daughter.