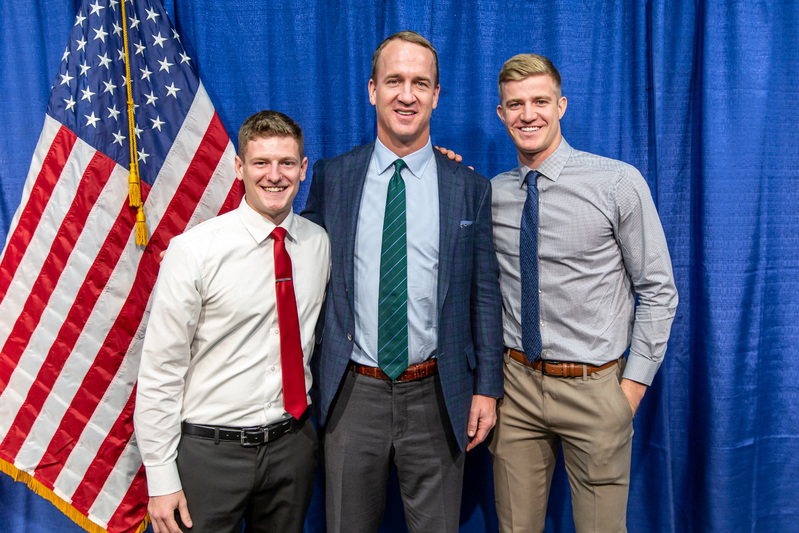 Photo caption: Ryan Klath (left) and Creighton Pfau (right) had the opportunity to meet and take a photo with Peyton Manning (center), who is considered by many to be one of the greatest quarterbacks of all time, during a Fargo Moorhead West Fargo Chamber event in Fargo on Nov. 5.

Peyton Manning is a Hall of Famer, two-time Super Bowl champion, five-time NFL MVP, and 14-time Pro Bowl selection. According to promotional material, Manning was invited to the 10th anniversary Voices of Vision event to share his legendary story and inspirational message. The Chamber group chose Manning because “he’s funny, he’s accomplished, he’s iconic, and he has so much to share with an audience. He is an athlete-turned-businessman and knows how to build successful teams and overcome adversity. He creates a winning team culture and leads with passion.”

Klath and Pfau are students enrolled in a Mayville State entrepreneurship class taught by Ted Stoa. A member of the Chamber, Stoa connected with Chamber operations manager, Tracy Powell, who was able to arrange for a complimentary admission ticket and one of only 50 photo ops with Manning for the Mayville State students.

According to Stoa, “Powell went above the call of duty contributing to Creighton and Ryan’s wonderful learning experience. This type of interaction with a leader of Peyton Manning’s quality often has a lasting impact on younger people. I can assure you both of these young men have benefited from the experience.”

Klath and Pfau made a presentation on the experience to their classmates and other invited guests on Thursday, Nov. 21. In their presentation titled “Peyton Manning’s Game Plan,” the duo expanded on several of the quotations Manning used during his presentation in Fargo, as well as the seven go-to plays of his game plan.

In summing it up, Ryan and Creighton described the experience as “awesome.”

Both Klath and Pfau are former high school football players, and Pfau has continued his involvement with the sport as quarterback of the Mayville State Comets football team.