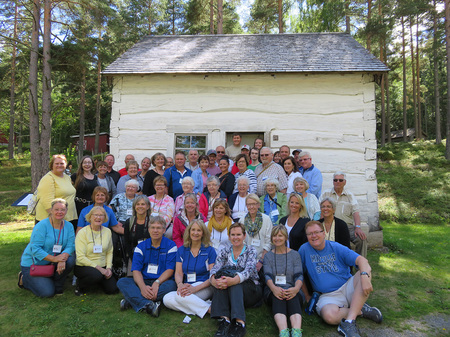 The Grand Hotel in Oslo was the starting point for a weekend adventure of seeing the sights of Vigeland Park, the Viking Ship Museum, the folk museum, and many other local points of interest.

The group then boarded a bus and headed for Bergen, staying at four lovely hotels located along the fjords, Oslofjord, Sorfjord, Bjornefjord, and Aurlandfjord. They toured the Fredriksten Fortress built in 1661 as a protection from the Swedes. At a museum in Nesbyen in Hallingdal the group visited an emigrant house that was originally built near Hatton, N.D. They crossed the Hardanger Plateau, viewed the Voring Waterfall, and shopped at the Hedeland glassworks factory and the Hardanger Bestikk pewter factory.

Many in the group felt that the highlight of the tour was a trip on the Flamsbana, one of the top-20 train rides in the world. They stopped at Flam and then cruised on the fjord the next morning. They were able to see a multitude of waterfalls during that two-hour water adventure.

Time spent in Bergen included a visit to the home of Edvard Grieg, Norway’s internationally known musician, and wandering around the historic Hanseatic Wharf, a UNESCO world heritage site.

The last two evenings of the trip were spent at the lovely Solstrand Hotel, which, like many of the other hotels, treated the group to special Norwegian-style buffets. As with the other buffets at which they’d had the pleasure of dining, the food was plentiful. A person could take a full plate of cold food, go back for a plate filled with hot food, and end with a selection of desserts on a plate. People were able to swim in the fjord before departing the next morning for the trip home.

“We were delighted to have had the opportunity to share this special time with our Mayville State alumni and friends,” said President Gary Hagen. “Everything about the trip was amazing.”

The Norway trip came about as a special activity prompted by the celebration of the 125th anniversary of Mayville State in 2014. Plans are to make alumni and friends travel a regular part of the Alumni Association’s activities. In September of 2017, the Hagens will be hosting a trip to Italy. Details will be available soon at www.mayvillestate.edu/italy.

Members of the Mayville State alumni and friends Norway tour group stopped for a photo outside the emigrant house located at the Hallingdal Museum, one of the oldest open air museums in Norway. The house was built by Ole Svendson Skrattegard, a native of Al, Norway, in 1882. It was located between Northwood and Hatton, N.D. until 1998, when it was disassembled and transported to Norway, where it has been re-assembled and now stands.